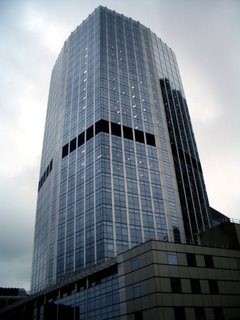 firstly, having seen the fall at 93 feet east, and still sweetly reeling from having been happily bludgeoned by the two bassists, the sweat, a maurading and tank-like "what about us ?" and yet more new no nonsense looping tunes, i must iterate publicly what i have long asserted amongst friends, namely that if you know anyone who doesn't "get" the fall, they cannot and should not be trusted. you can like the fall or hate the fall and that is your duty and right, but if you don't understand why the fall are so feted and rated, you must leave the building now. that is all.

and then (swoon)... brighter. ok i must at the outset confess that in reality they have not, outside of my dreams, resurrected their old label in order to release "if i could see" and "wallflower" (out-takes from their classic sarah album "laurel") as a double a-sided single. unlike most label bosses, clare wadd and matt haynes were responsible for perpetrating gratifyingly few crimes against music, but in my befuddled, oversentimentalist mind not allowing those songs to see the light of day was up there with not releasing action painting!s "laying the lodger", not running with the golden dawn's "no reason why", and not releasing the orchids' beautiful "thaumaturgy" about a million years earlier. anyway, if, back in '91, this my fantasy brighter single had happened, it would i promise you have been a seismic global event to rank alongside those effortlessly serene "solace" and "sensitive" double-headers: at my age, i feel i need not be ashamed to aver that listening to them can still reduce me alternately to tears and insane joy.

however, the bonniest news of this long yr is that "if i could see" and "wallflower" have at last received their unbelievably overdue official release, courtesy of matinee recordings' new brighter compilation, "out to sea", a "laurel plus" (the plusses being various prev. unreleaseds, and 5x tunes from the two great little flexis that are mine forever, thanks to two judiciously-spent 50p coins a decade and a half ago) to help sate completists and to provide a companion for the equally fabulous "singles 1989-1992". obviously, even aside from the single that never was, "out to sea" is the business. also, please note that the very first track on it is still, for me, the greatest song of all time.

in other news, i went to a christening in h*mpstead not that long ago. it was, obviously, lovely: part of our duty as witnesses to the solemnity was to reject satan and his various works. nevertheless, as a rule one should show some caution in such sweeping commitments, else recent deicide and slayer releases risk neglect. it seems touchingly inevitable, rather than in any way sinister, that deicide released their new (download-only) single on 6.6.06: and that slayer, on new lp highlight "cult", manage to rhyme "666" with "crucifix" as if they were singing lyrics first scrawled on their folders at school earlier that day, rather than words penned by fortysomething men of the world and veterans of the entertainment industry.

while young blood like demiricous are making old-style slayer thrash more worthy of serious veneration, slayer, especially vocally, now seem much more mainstream, probably in the realisation that these days it's far easier to knock spots off maiden, say, than newer kids on the block. tempering their obsession with christian iconography only to throw in more less cartoonish references, to modern warfare and foreign policy, there are some coruscating moments (and "flesh storm" is a bracing opening tune) but overall my appreciation of "christ illusion" is probably rooted in warmth and nostalgia rather than any suggestion of it being near the cutting edge.

"homage for satan", o.t.o.h., carries more menace, not least because glen benton's guttural rasp makes the tom araya of 2006 sound like amelia fletcher in comparison. reports reach my ears that the whole album is this good, which would be quite a result, because "homage" comes roaring out of the blocks in a way that not many lps of this ilk manage, and even manages to incorporate some overextended guitar solos without causing me to rush for the exits (while guitar solos, in general, are of course a *BAD* thing, there are exceptions: carcass sneaked some in to later releases, while there's even one of sorts in bubblegum splash's "the 18.10 to yeovil junction", and that's one of the finest tunes kind of ever. drum solos, on the other hand, are unacceptable, unless you're lindy morrison). anyway, brilliantly produced, with the hooks and clean lines to the fore notwithstanding the onslaught of benton's gargled growls, this single was a very pleasant surprise.

when, after a 17-year hiatus, the reformed terrorizer declared their second album "darker days ahead", we could not have known that virtually as it hit the streets, guitarist jesse pintado would die, still in his thirties, following a diabetic coma. rarely can a return have been so brutally nipped in the bud. sadly, "d.d.a." is not the grindcore classic we yearned for - you'll need to look to the two lock-up albums for recent evidence of mr. pintado's skills in that direction; yet the legacy that we are left with is still enough to ensure the band will be fondly remembered for the right reasons, with "darker days" being a thick, earthy, hulking mass of death metal, which despite a welcome revisiting of "dead shall rise" is very different from the pacy, still nr-sublime "world downfall" debut, and as such terrorizer are laid to rest having covered all the bases.

so if the next great grindcore album was not to come from the supposed progenitors of the whole movement, then who ? perhaps wigan, united kingdom's own narcosis, touted as inheritors of the carcass / napalm death tradition ?

well, not quite. "romance" is an instantly appealing record, a score of songs in as many minutes, a high-speed collision of a.c., flyblown and "reek of putrefaction" that rarely settles into a groove for more than about 4 seconds before its stop-start drums and breakneck guitars regroup and then recommence battle with the shrieking vocals. invigorating, challenging and most of all fast, i commend "romance" to your record players utterly. it is not, however, the unallayed early-90s style grindcore which it is being sold as in certain quarters.

a similar kinda thing applies to the gresham flyers, a london-based sextet whose debut "shiftwork" 7" seems to be badged as recalling pulp vs. the wedding present. in fact, it's much better than that might suggest, a keyboards-to-the-fore indie pop song of seemingly indeterminate vintage that starts with the clean melodies of early mighty mighty and, when the boy vocals come in, seems to jump back through time to become a new wavey paean to the listlessness of clocking on, and off, and on.... but always informed by the more contemporary knowing pop wiles of the likes of bearsuit. a highly enjoyable single.

the mysterieux full crumb have links to trilemma, lo-fi thinking man's indie-popists of the very early C21st - this is detectable in their compact guitar musings arrayed across 38 minutes of cd-r, which range from chunkier outings like "clamber asunder" to a sweep of precious early-hood balladettes most notably "life is not a stream" and my current drug of choice, "nightingale stew". in another place, i once waxed words on teruo's "too wide eyes" 7", and "stew" wonderfully pinballs between many of the same reference points: guitars softly criss-crossing, minimalist lyrics refusing to over-intrude (see also f.m. cornog), a kind of serenity seeping into the speakers as if to gently berate you for having overdone your immersion in "christ illusion" and to demonstrate to you what you'd been missing. by all accounts full crumb are super-prolific, so there are mountains of cd-rs of this kind of thing, but "thorax" is the one that you need purloin for this.

finally may I recommend the following links in blogland:

- the daddy of all things 'proper' indie and my 1st port of call these days for new developments in c86ville; leading me to:

- one of the few blogs that I've truly found fascinating, and with which I am in worringly wide agreement on all matters of musical "taste";

- this excellent post on c86, which - amongst many other things - rams home the point that revisionists everywhere forget: for some of us, c86 was a reaction, a post-punk d.i.y. revelation, and not the conservative "anti-hip hop" etc force it now seems to be portrayed as (a tangent, I know, but indie, hip-hop, and metal subgenres on both sides of the atlantic were all equally fresh and exciting in '86);

- ooh, and check these most entertaining words on the same subject, much as I disagree with any disparaging comments on the mighty phalanx of ron johnson bands.

next time, if my current listening is anything to go by (which frankly it usually isn't): wiley, lovejoy, manage, sarandon, napalm death.

The Gresham Flyers said…
Thanks for the mention. It might please you to know that two of The Flyers were at the same Fall gig!
October 16, 2006 11:06 am

Anonymous said…
We also noticed that you (subconsciously?) referred to our made-at-home record label as 'Barrytown', which immediately marks you as a Steely Dan fan, and thus a Jolly Decent Person. It's actually called Barryland- no one else but me (Thom the bass player) could abide having a Steely Dan reference. 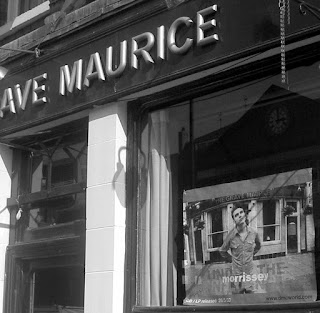