Around the turn of the century, there was a seam of wonderful indiepop coming from a smallish place called England, which our friends from Matinée Recordings mined for us by releasing fine records from Harper Lee, Sportique, the Windmills, the Would-be-Goods and others. Yet centres of gravity shift, as the tectonic plates beneath them grumble and crawl, and a decade or so on it is the ever-fertile pop breeding ground of Scandinavia which provides the label with some of its blue riband artistes. Following the achievements of Northern Portrait, Champagne Riot, Cats on Fire and - not too long ago, but too long ago, if you get me - Electric Pop Group, the latest ensemble to make their Matinée bow are Azure Blue (the new project of Tobias Isaksson, ex-of Irene and Laurel Music).

Appropriately enough, "Rule of Thirds" parcels Azure Blue's labours into nine sleek little songs. Grant McLennan cover "Fingers" is an astute choice of opener, immediately placing Azure Blue within a grown-up pop tradition, thus informing appreciation of the rest of the album at the same time as paying due tribute to the late G.W.'s easy way with a song. It's followed by "The Catcher In The Rye", which delivers on many counts (one of which is that you can scrawl it on a compilation tape tracklist straight after former Matinée signing Airport Girl's "Salinger Wrote"), but also that it sets the guitar-pop influences hinted at by "Fingers" alongside Tobias' obvious fetish for synthpop, with a result that will have you dancing up the skirting boards. Indeed, "The Catcher In The Rye" is the first of three standout should-be singles which, for our kroner, illuminate the album with its pearliest dew drops (drops) of palpable pop promise: the others are "Little Confusions", which pots a declaration of unswerving romance into less than three minutes, and the neat, poignant and tart "Two Hearts", an unerringly catchy marriage of synths and strings.

Over the album as a whole, Azure Blue switch to more contemplative musical moods too, and manage to flit between sounds as diverse as early OMD, Celestial and Orange Cake Mix, even channelling Pachelbel for good measure on a couple of songs, while still finding time for a liberal use of samples to break up the flow a little. It's clear their devotion to synthpop is sincere, and on "Little Confusions" and "Dreamy Eyes" (which comes into its own during its final, instrumental flourish) there's even some Hook-high bass which brings back memories of 80s New Order or the Cure. And "Rule Of Thirds" ends in just the right way, too, with "Chesil Beach" affixing Harper Lee-like melancholy to those swirling synths as it searches, longingly but hopelessly, for an upbeat lyrical coda: instead of Keris looking out across the Channel in "William Blake", this is Tobias standing on the Dorset shingle, watching his memories float away on the English tide. There could be no better way to say goodnight, Irene.
Email Post
Labels: azure blue matinee 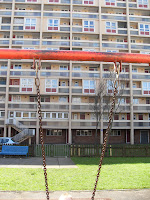