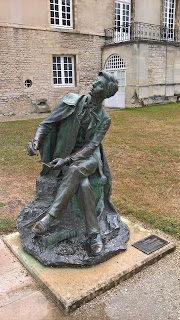 Today’s pic is “L’Etudiant”, a chinstroker in bronze by writer & sculptor Edmond Le Tual de Laheudrie, which sits in the impressive surroundings of Caen castle. Although dating from 1905, it’s strikingly modern in pose, no?

Anyway. Another month, another vinyl re-release for outstanding songs by an ex-Sarah band (following on from those outings last winter and spring for Boyracer, Blueboy, Secret Shine and 14 Iced Bears). Decades overdue, this “Trial Cuts” collection from the raucous yet enigmatic Action Painting! is a must: this is a group that definitely merited a better post-career send-off than the one track they got on “The Sound Of Leamington Spa Volume 5”. And the bottom line, trust us, is that it’s worth a few quid of anyone’s hard-earned to pick up in one place the four marvellous A-sides the south coast* band put out between 1990 and 1994: “These Things Happen”, “Classical Music”, “Mustard Gas” and “Laying The Lodger”.

Action Painting! initially emerged, ever-ebullient and opinionated, from the fanzine scene. So it was no surprise that the group never seemed to lack confidence: I’m sure I remember an interview in which, instead of expressing delight – in the usual way - that Sarah had signed them, they just expressed nonchalant surprise that it had taken so long for Clare & Matt to fall for their demo tape and offer them a 7”.

That demo tape, one would guess, included “These Things Happen”, which would become their debut single and which, despite its world-weary title, actually ended up being the sound of a teenage summer for us. The song is tense but buoyantly melodic jangle-strum with a pained, plaintive vocal and a guest synth slot now officially credited to Matt Haynes after all these years (proving him surely to be Sarah’s Rick Rubin). The B-side, “Boy Meets World”, was apparently their attempt to do Stock Aitken Waterman, an attempt that – much as we like it - we would not regard as wholly successful (it’s no “I Heard A Rumour”).

Then, something a little unexpected happened, namely a screeching change of direction as the indie-pop sensibility was seemingly snuffed out entirely. Second single salvo “Classical Music” saw the boys ditch the jangle and go for a first-wave punk sound that would have happily taken a sledgehammer to a synth** rather than deploy one in the studio, whoever was playing it. Before long the fabulous, appropriately explosive “Mustard Gas” 7” combined their new, chaotically fast edge with even tighter playing and production. Later, after the Sarah party was over, one further mini-classic appeared. “Laying The Lodger” was a white vinyl 7” on Damaged Goods, wrapped in a sleeve capturing the above quote from French avant-garde artist Francis Picabia, and a song that again burned furiously through the eardrums: two more minutes of utterly energising, if unsophisticated, punk thrills.

Yet somehow there proved to be no upward momentum: like so many bands that recorded for Sarah, Action Painting! never seemed to find safe ground on which to pitch their tent, once they’d been forcibly evicted from Upper Belgrave Road. Instead, even the mighty noise that they were making was drowned out amidst the hype being generated elsewhere by surging laddism and the never-burgeoning ‘new wave of new wave’.

You should own this record just for these four brilliant singles, all present and correct, but other highlights include the snotty, oafish B-sides to “Mustard Gas” (“Collapsing Cloud” and “Art Student”), which embrace us like old, if slightly dishevelled friends; slightlydelic drone instrumental “Hip To Hate” (this was on the flip of “Classical Music”, alongside the sadly absent “Sensation No.5” and deserves a shout as arguably the most experimental tune ever released by Sarah, although we’d be hard-pressed to say it was one of the best); an alternative cut of the brisk “Boy Meets World”, presumably rejected by PWL (the other big indie label of the time, of course); and the demo version of “Alice Power”*** which is an excellent closer to the collection, splayed over seven and a half minutes. Raw, rocky and lithe, it shows that AP! had much more to them than the three-minute pop song and the two-minute blitzkrieg.

Then, for the truly dedicated, there’s a CD version of “Trial Cuts”, which beefs it up with rarities including early demos of the ‘hits’, and a local radio interview and session (including a cover of the Blue Orchids’ “A Year With No Head” that sounds not unlike Sportique). This warts-and-all selection makes for uneven listening (and also, in bad news for the completists, a couple of the original B-sides are still AWOL) but is still one to savour. And to give the band - and him - credit, the CD ends with a snippet of Steve Lamacq following up the end chords of “Mustard Gas” with the Sniffin’ Glue mantra, “here’s three chords, now form a band”. Proof positive that - as we always said - Sarah had more in common with Year Zero than both its detractors, and more purist zealots, would admit.

By way of epilogue, we shouldn’t leave you without pointing out that, circa 2008, Action Painting! resurfaced slightly, with Andy and Lee morphing into a new combo, Socialist Leisure Party, for a short but productive comeback which fostered their “Mondayland” CD-r on uber-boutique Berlin indie Edition 59, a 7”+CD package thingy on Shelflife called “Tactical POP! for Coffee Cadets” and then two further 7”s, “Turktown Saints” (on the inestimable Cloudberry) and “She Will Flame” (via top-notch Eastbourne distro-spinoff Pebble Records).

There are several top tunes amongst these recordings – “Head In The Hay” and “Down With The Kids” amongst them – but it’s “Turktown Saints” which must rank as the peak of SLP’s adventures in sound, a song which revisited the breezy strum of their first single alongside some gorgeous, Emily-style multi-instrumentation. It’s smart, tuneful, intelligent and surprisingly modest. It’s also worth mentioning that apparent swansong “She Will Flame” was quite a contrast, heading more obviously down the dark alleys of yesteryear-zero and the punk power of the last three AP! singles, and only slightly marred by an overly-excitable drum machine and the fact it lasts for three minutes rather than two (hmm, there’s an Even As We Speak compilation CD title about this). However, the Socialist Leisure Party records help to cement the status of Action Painting! (or whatever they called themselves from time to time) as a *righteous* singles proposition, at least when they - or their various labels - got their act together.

Heck, we’re still buzzing from their set at the Lexington earlier in the summer, as you may even have read here. May Action Painting! continue to annoy lightweights for many years yet.

*The contact addresses on the record sleeves start in Gosport and then move to Fratton (all within Portsmouth, so solid naval territory there) but later on Action Painting! seemed to get lumped in with a wave of Brighton bands, so it’s possible they just kind of ended up heading up the coast eastwards.
**A metaphor memorably employed by Robert Hampson of Loop in a Sounds interview a few years earlier. He didn’t come across as a big fan of the synthesiser.
*** The demo dates from their Sarah-era, 1992, and it’s easy to imagine it having been rejected by the label (in just the same way as they wrongly rejected the Golden Dawn’s “No Reason Why”…) The song eventually saw the light of day two years later, on the flip of “Laying The Lodger” – there’s also a radio session version on the “Trial Cuts” CD.
Email Post
Labels: action painting emotional response le tual sarah socialist leisure party